Impact Investing
Posted on May 2, 2013 by Yosef Abramowitz 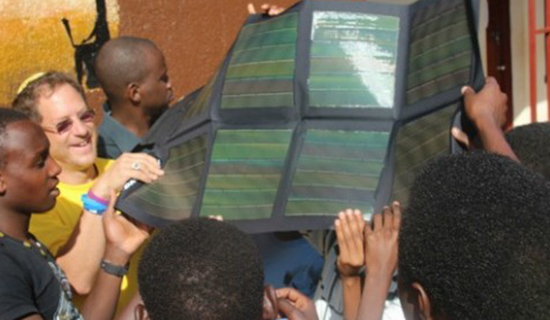 I couldn’t have predicted my unusual journey from the day when Larry Moses informed me that I had won the "Jewish leadership lottery" and I joined Class 3 of the Graduate Fellowship Program to pursue Jewish journalism. My studies at Columbia University, JTS and HUC, complemented by the Leadership Institutes, prepared me well for my work in pioneering Jewish multi-media at the dawn of the Internet age, including sites like MyJewishLearning.com, InterfaithFamily.com, birthrightisrael.com, BabagaNewz.com and the journal Sh’ma. But after spending a very satisfying 15 years innovating the sphere of Jewish media and education, I then abandoned the Jewish people when I made Aliya in 2006. Truth be told, I was burning out. But after a year on Kibbutz Ketura -- reconnecting with my family, with nature, and with my activist spirit -- I was ready for a new challenge.

Over the past seven years I helped co-found Israel’s first solar power developer, built Israel's first commercial solar field, raised more than $300M in funding for future fields, and launched a separate global solar company to help countries throughout the world become energy independent. The two companies hopefully will deploy more than $3 billion in solar energy in the coming years, in Israel and in developing countries, like Rwanda. Since I am a Jewish activist in my DNA, any business enterprise I become involved with needs to have a strong mission return along with the opportunity to reward investors for taking some risk with us. I used to speak to donors about receiving a mission-return on their philanthropic investments. Now I speak to investors about financial returns on their mission-related investments.

Recently, after nearly seven years in exile from Jewish communal life, I have spoken to numerous groups during my investment trips -- I realize I miss the chevrah greatly. Bumping into former colleagues and many of you at various Jewish conferences has rekindled in me a sense of longing for the community that nurtured my values, taught me invaluable leadership skills, and invested in my success. I have been thinking about the question as to whether we have to choose between our Jewish community and the global community, or perhaps there is a new third way.

Here are some thoughts on these matters.

We need a for-profit, Jewish-values-based model that can leverage billions in the service of our global values while providing returns to our communal institutions. At the 2012 General Assembly, Reut convened a series of conversations to discuss how Jews and Israel can impact the lives of a quarter of a billion people on the planet, leveraging Israeli know-how in the developing world. There aren’t enough charitable funds in Jewish life to both sustain Jewish life and help the millions of needy people in the world.

How many Jewish organizations invest according to Jewish values and invest in Israel? How many federations, community foundations and Jewish communal pension funds are invested in oil companies as opposed to renewable energy companies? (I am influenced here by Wexner Heritage Alumna Julie Hammerman, the Jewish Federation of Greater Miami, and Blue Star Index CEO Steven Schoenfeld). The next phase is to engineer new models of not how we deploy the five percent of our proceeds from our endowments for Jewish causes and institutions but how to apply our values to the 95 percent of our funds - many billions of dollars - so that we can be part of something transformative for humanity and ensure healthier returns to reinvest back in the Jewish community. I want to see the returns from renewable energy go back to the Jewish community so that we have more money for Jewish education, for supporting the partnership between Israel and American Jewry and for other good causes. When foundation endowments were stagnant, so was giving to support innovation in Jewish life. With the Israeli stock market out-performing the S & P 500k why are Jews and Jewish institutions shunning the Israeli stock market? (None of our companies are public, so this is not a commercial)

I believe the Jewish people are uniquely poised to save the planet, and in the process, to strengthen our own sense of distinctiveness as a people with purpose. As we approach Shavuot, perhaps we can re-envision the covenant between Jewish leadership and Jewish money in new and strategic ways. I continue to be inspired by and grateful to the Wexner leadership and community for nurturing the next steps in my journey by being able to put forward some of these new questions. Happy Earth Day.