The Zionist angel of Rwanda

The Agahozo Shalom Youth Village provides a nurturing community for 500 of the most needy orphans. 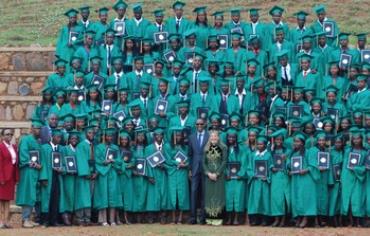 A graduation photo from the class of the Agahozo-Shalom Youth Village. Photo: COURTESY AGAHOZO-SHALOM YOUTH VILLAGE
An hour outside of Kigali, past industrious children carrying yellow plastic water canisters and women with bundles on their heads, where the road snakes up revealing a stunning view of the green valleys below, Anne Heyman, in 2006, stood in the rain under a lone mango tree with representatives of 56 local land-owners and redefined history with hope.

In the land of a thousand hills, a million people were butchered in a hundred days in 1994, leaving a million orphans by the time the RPF (Rwandan Patriotic Front) staggered into the bloodied Rwandan capital, as the world stood idly by. A decade after the genocide, Heyman and her husband Seth Merrin sponsored at Tufts University a speaker from Rwanda, as part of a series on moral voices. A decade after the genocide, they were horrified to learn, there were still a million orphans in Rwanda and no initiative to solve the issue.

Heyman, 43 at the time, dug deep into her Young Judaea Zionist activist roots for inspiration – she grew up singing Arik Einstein’s “You and I will change the world” – and resolved to import to Rwanda the Israeli model of youth villages that were established after the Holocaust to absorb a generation of traumatized youth.

The Agahozo Shalom Youth Village – part Yemin Orde, part Kibbutz Ketura, part Anne Heyman – opened its door only two years after Heyman signed the land deal under the mango tree. It provides a nurturing community for 500 of the most needy orphans, a campus with a communal dining room, high school, health care clinic, homes with 16 kids each and a house mother, workshop spaces, running water, plumbing and electricity, and the best Internet service in Rwanda.

Nearly a decade after hatching her audacious idea, the mango tree still stands, yet the angel of Rwanda has fallen. President Shimon Peres sent a condolence message that was read Monday at New York’s Bnai Jeshurin synagogue, before a stunned community of mourners. Heyman, 52, died on January 31 on the operating table, as physicians from the Delray Medical Center tried to save her following a horseback-riding accident during a jumping competition.

As Rwandans begin to commemorate 20 years since the genocide by machete, they are also now mourning a daughter of Israel. This Saturday, a special service will be held for the 500 kids at the village to mourn the woman they called “our grandmother Anne Heyman.” Hundreds will be in attendance.

Susan and I were invited by Anne to volunteer at the village two years ago, and to bring our children. It was, we knew at the time, a trap that we knowingly walked into, because Anne, and her mission, were compelling. (Two of our children hail from East Africa.) And when you meet the kids of the village, look into their eyes and see the sparks of hope and intelligence and love, it overtakes the despair, anger and sadness that you leave with after visiting the genocide museum in the capital.

For Anne, who owned a home in Herzliya as well as in New York, spoke Hebrew to her kids, and met Seth under the blazing sun of Kibbutz Ketura as a volunteer, building an Israeli-inspired youth village was 21st-century Zionism, replete with many Jewish and Israeli volunteers. Yet for Anne it was not about public relations, but about the positive role that Israel could play in the world.

Indeed, 99 percent of the graduating class last year passed the matriculation exams, and students give back to their local communities by teaching English, building houses and helping with farming. A young woman, Emet, explained to me over a plain yet nutritious meal of mostly beans, rice and plantains that her first two years in the village, she learned “tikkun halev,” fixing of the heart – she taps gently her T-shirt – in order to go out and do “tikkun olam,” healing the world.

To go from destitution and despair to academic accomplishment and community leadership is a miracle, one celebrated by Rwandan President Paul Kagame, both at the first graduation, and then, last June, when he visited Jerusalem, where Anne and I were privileged to host him to share a vision for a solar-powered Rwanda, starting with the youth village.

An eery snowstorm swept over New York City during the funeral. “These are the ice cold tears of God,” said Seth, her husband. It rained on their wedding day, pointed out one eulogizer, and snowed during her funeral, but the rest of her life “was pure sunshine.”

Her three children, dignified and menchlekeit, spoke of a mother who instilled a love of family, of giving, and of pursuing dreams. She would have both kvelled thru the tears and words and sniffles but also, frankly, would have been impatient. “Who is going to care for the kids of the village?” she intoned from Heaven. “That’s all that matters.” We all heard it.

The author serves as CEO of Energiya Global Capital and can be followed on Twitter @captainsunshine.

This entry was posted in Blog Post, Press. Bookmark the permalink.