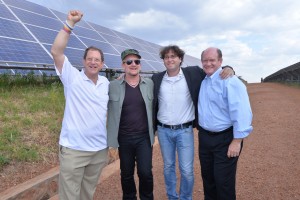 In a fortuitous twist of political fate, a delegation of US Congress and Senate Representatives to the solar field in Rwanda included rock superstar Bono, along with members of his One.org foundation. "One" is the force behind the Electrify Africa Act which is once again on the USG agenda. Yosef and Chaim are pictured here with Bono and Senator Chris Coons, Co-Sponsor of the Electrify Africa Act.

The visit included remarks by Bono, Yosef, Chaim and JC of the ASYV, as well as a spontaneous knighting ceremony, in which Bono bestowed a one.org bracelet upon Yosef with a karate chop and the title of "awesome dude."

This entry was posted in Uncategorized. Bookmark the permalink.