Israeli For-Profit Solar Developer with a Non-Profit Soul Increases the Light During Hanukah and Year-Round
Posted on March 20, 2014 by Sara

With Hanukah candles being lit in homes around the world—mine included—starting tonight, you might be interested to know about an early rabbinic debate that has great relevance for our world today.

In celebrating Hanukah, these early scholars wanted to know, should one start with eight lights and work down to one? Or, start with one and work your way up?

If you’ve ever lit Hanukah candles, you know the answer: Start with one and work up. The reason is meant not just literally but metaphorically: During a dark time, such as the one we face now with climate change, it’s best to increase the amount of light in the world. 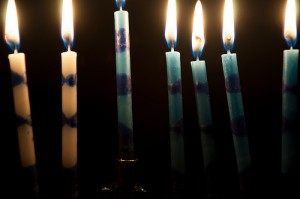 In Israel and around the globe, a Jerusalem-based solar developer, Energiya Global, is doing just that.   My husband, Matthew Diller, and I had the opportunity to visit Energiya Global's Jerusalem office this summer.  Matthew is dean of  Benjamin N. Cardozo School of Law in New York City (part of Yeshiva University), where Weldon Turner, Energiya Global’s COO, got his law degree. Energiya Global calls itself “a for-profit company with a non-profit soul.”

EG’s think-big idea is this: By 2020, to bring as much as 10,000 megawatts of pollution-free solar power to developing countries. EG is planning clean electricity for up to 50 million people who currently go without, or, instead, depend on high-polluting fossil fuel systems such as dirty diesel generators or kerosene cook stoves and lamps. In the process, Energiya Global hopes to help lift many of these people out of poverty and address the darkness that global warming increasingly presents.

Energiya Global was co-founded by American immigrant Yosef Abramowitz (whosesister-in-law is comedian Sarah Silverman), and got its start after Abramowitz and colleagues built the first utility-scale solar array in Israel in 2011. That event sparked lots of international press, and Abramowitz’s original company, Arava Power, was inundated with inquiries and requests from around the world.

Already, EG has raised more than $800 million in conditional financing, and is at work on projects in Turkey, Romania and Ecuador. More are planned soon, in locations as far flung as South Africa and North Carolina.

In many of the places where Energiya Global has begun to work, solar power is often  cheaper than highly polluting diesel power (often the only other energy option), and bringing solar will not only improve local residents’ health but will also free them from the economic burdens of importing fossil fuels.

One of EG’s most inspiring projects is underway in the African nation of Rwanda. That country of 10.5 million people, riven by genocide in 1994, currently has only about 100 megawatts on the electric grid; about half of that comes from diesel generators. A new Energiya Global solar array will add another 8.5 megawatts. The solar field is being constructed on land leased from the Agahozo-Shalom Youth Village. ASYV raises orphans of the genocide and other vulnerable young people and is modeled after the Israeli children’s villages that raised hundreds of thousands of orphans after the Holocaust. The lease provides ASYV a long-term revenue stream and clean electricity. Energiya Global calls the project a “win-win situation and a natural partnership.”

Hanukah comes at a dark time of year to remind us, perhaps, that miracles are possible. They require some dedication—in fact, the word Hanukah is derived from a Hebrew verb meaning “to dedicate”—and perhaps a bit of Divine spark, too. No doubt, Energiya Global is carrying both of those with them, as they increase and harvest the light that developing countries and the rest of us so desperately need.