Energiya Global CEO Yosef Abramowitz Takes Home Bonei Tzion Prize for Significant Contribution to the State of Israel
Posted on May 21, 2014 by Sara

Jerusalem, Israel, May 15, 2014 — In a ceremony at the Knesset, attended by Israeli dignitaries as well as friends and family of this year’s seven prize winners, Yosef Abramowitz, 50, accepted the Bonei Tzion prize in the category of Entrepreneurship and Technology. The prize, now in its third year, recognizes significant contribution to Israeli society by immigrants from English speaking countries. Hundreds of olim, originating from the USA, Canada, South Africa, the UK, Australia and New Zealand were nominated for the prize.

In his address to the prize recipients and attendees, Speaker of the Knesset MK Yuli Edelstein said, “The Knesset is proud to host the award ceremony for this noteworthy prize, which I hope will become a traditional reward for Olim who excel in their contribution to the State of Israel and its society.”

Mr. Abramowitz, CEO of Energiya Global Capital and Co-Founder of the Arava Power Company is recognized as a pioneer in the field of solar energy in Israel. Energiya Global was established in order to address the lack of renewable energy in developing nations by exporting Israel’s expertise in this field.

Howie Rodenstein, chairman of Energiya’s advisory board said, “On behalf of the advisory board of Energiya Global Capital I am proud to congratulate Yosef as a recipient of the prestigious Bonei Tzion award. His vision, integrity and boundless enthusiasm will undoubtedly catapult the world's neediest populations toward a higher quality of life by increasing access to renewable and affordable energy in the developing world.”

This year’s other prize recipients are:

Energiya Global’s mission is to bring solar energy to under-served populations in developing nations. The company strives for a triple bottom line, delivering good financial returns to investors in addition to strong socio-economic and environmental returns in developing countries. 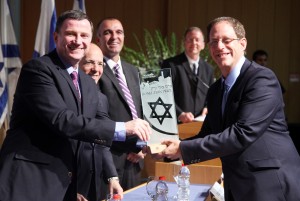 This entry was posted in Press Release. Bookmark the permalink.